The GAPC Worker Concern Helpline (WCH) provides a way for farmworkers on a GAPC Grower Member's farm to ask for information or express concerns.

The GAPC WCH hopes to remedy concerns or misunderstandings and improve worker and grower relations by encouraging workers to express concerns that growers cannot address because they are not aware of them and showing workers that growers and the industry care about their concerns.

The GAPC WCH is managed by ClearVoice a project of The Cahn Group.

Posters and talking points were made available to all GAPC Grower Members at in person Annual GAP Trainings and are also available to purchase online through our GAPC Store. 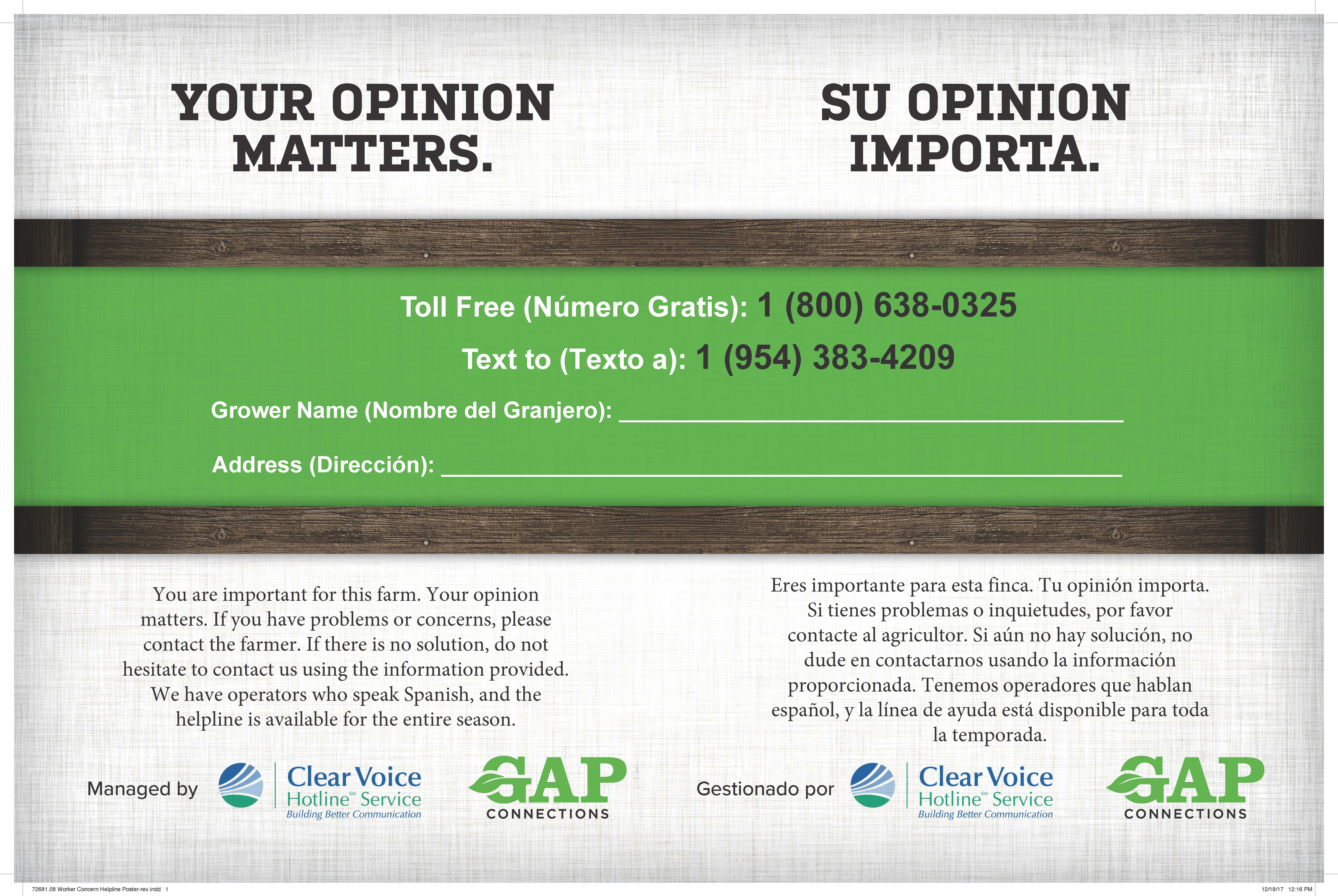 We also have a Worker Rights and Responsibilites Poster which provides a template of rights and responsbiities.  It does not replace or supersede any existing laws or employer policies and contracts.  It is a resource to begin the conversation with workers about their rights and responsiblities while on a grower member's farm.  Poster is in English and Spanish and was made available to all GAPC Grower Members at in person Annual GAP Training.  The poster is also available to purchase online through our GAPC Store.

◦BEST PRACTICE: Communicate with your workers and discuss their rights and responsibilities.

Human Trafficking Awareness
from the U.S. Department of Justice

Human trafficking, also known as trafficking in persons or modern-day slavery, is a crime that involves compelling or coercing a person to provide labor or services, or to engage in commercial sex acts.  The coercion can be subtle or overt, physcial or psychological.  Exploitation of a minor for commercial sex is human trafficking, regardless of whether any form of force, fraud, or coercion was used.

Although there is no defining characteristic that all human trafficking victims share, traffickers around the world frequently prey on individuals who are poor, vulnerable, living in an unsafe or unstable situation, or are in search of a better life. Trafficking victims are deceived by false promises of love, a good job, or a stable life and are lured or forced into situations where they are made to work under deplorable conditions with little or no pay.  In the United States, trafficking victims can be American or foreign citizens.  Some of the most vulnerable populations for trafficking in the United States include American Indian/Alaska Native communities, lesbian-gay-bisexual-transgender-questioning individuals, individuals with disabilities, undocumented migrants, runaway and homeless youth, temporary guest-workers and low-income individuals.

Victims can be found in legal and illegal labor industries, including child care, elder care, the drug trade, massage parlors, nail and hair salons, restaurants, hotels, factories, and farms. In some cases, victims are hidden behind doors in domestic servitude in a home. Others are in plain view, interact with people on a daily basis, and are forced to work under extreme circumstances in exotic dance clubs, factories, or restaurants. Victims can be exploited for commercial sex in numerous contexts, including street prostitution, illicit massage parlors, cantinas, brothels, escort services, and online advertising. Trafficking situations can be found across the United States.

Just as there is no one type of trafficking victim, perpetrators of this crime also vary. Traffickers can be foreign nationals or U.S. citizens, family members, partners, acquaintances, and strangers. They can act alone or as part of an organized criminal enterprise. People often incorrectly assume that all traffickers are males; however, the United States has prosecuted cases against women traffickers. Traffickers can be pimps, gang members, diplomats, business owners, labor brokers, and farm, factory, and company owners.